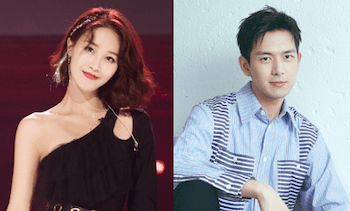 Chinese actress, Lyric Lan (蓝盈莹), is one of the contestants on Mango TV’s mature girl group survival show, “Sisters Who Make Waves” (乘风破浪的姐姐). On the first episode, Lyric Lan received the highest score, 91 points, out of all the contestants. During one of the shots, netizens noticed Lyric Lan’s cell phone cover was of Li Xian’s (李现) face. Lyric Lan and Li Xian played lovers in the 2016 series, “Who Sleeps My Bro” (睡在我上铺的兄弟). Netizens immediately speculated whether there were dating rumors between the two.

Lyric Lan’s manager responded to the media about the dating rumors and expressed it was all a big misunderstanding. The manager expressed that when Lyric Lan was practicing, she gave her cell phone to a staff member for safekeeping. Afterwards, she just randomly took a staff member’s cell phone and used it as a mirror. She didn’t think that shot would be recorded. The staff member who owned the Li Xian cell phone cover had a good laugh when the rumors came out.