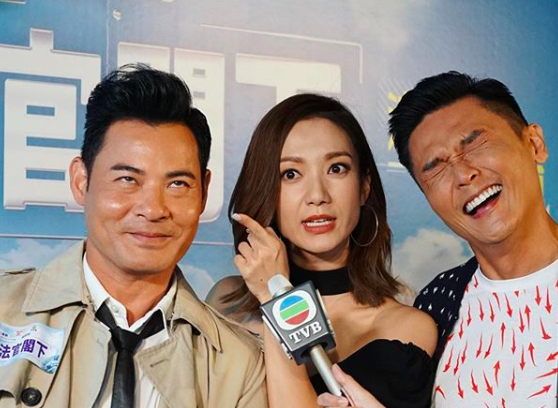 TVB’s anniversary series, “OMG, Your Honour” (是咁的，法官閣下) has aired for a week now and has earned some praise from the public.  The cast of “OMG, Your Honour” were promoting the series today on a double decker bus.  Grace Wong (王君馨) even sang the theme song while Ben Wong (黃智賢) and Eddie Kwan (關禮傑) were her dancers.  As the lead actress, Grace Wong says she feels like the third party between Ben Wong and Eddie Kwan and that the two of them are really cute together.  Ben Wong says, “Brother Eddie is good looking, he’s okay.  Netizens say the real couple is Eddie and me.”  He turns to Grace Wong and jokingly says, “Please don’t bother us.”

Ben Wong also reveals him and Eddie Kwan will be revealing a lot of skin in the sauna room and promises to have eye catching moments.  When asked if he would want to get the “Best On-Screen Couple Award” with Eddie Kwan, Ben Wong laughs and says, “Sure.  It would be pretty good.  I would want the company to consider the netizen’s suggestions.”