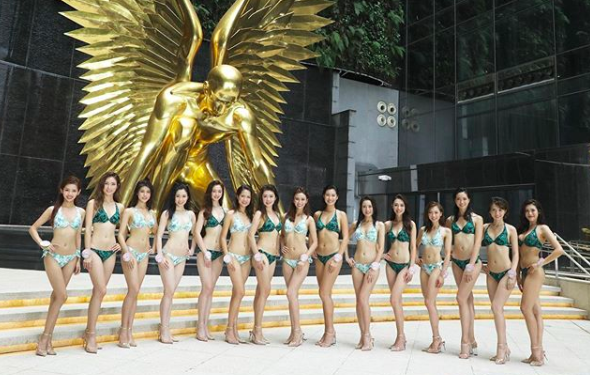 The 15 contestants of the 2019 Miss Hong Kong Pageant were in Macau recently to film promotional content. They met the media dressed in their swim suits for the first time. According to the media, hot favorites, Kayan Choi (蔡嘉欣) and Carmaney Wong (黃嘉雯), were in their best condition.

Kayan Choi, who was revealed to have a tattoo on her left bikini area, had always skirted the issue when asked about it by the media. She had told the press to take notice during the swim suit event. Well, she did a great job concealing it, because there was no tattoo showing. When asked about it later on, Kayan Choi revealed, “I have a small tattoo there. Wearing the swim suit covers a part of it. The parts that it doesn’t cover, I used make up to conceal it.” She also told reporters that everyone can zoom into the pictures 100X and look at the videos to see it.

As for Carmaney Wong, she said she wasn’t use to being photographed in her swim suit so up close. Kayan Choi jokingly referred to her and Carmaney Wong as advanced age contestants as they are both 25 this year and just made the age requirement cut off. If they didn’t join this year, they wouldn’t have an opportunity next year.

The both of them thought Rowena Wong (黃詠柔) had the most eye catching swim suit modeling. Carmaney Wong explained, “She has six pack abs. So stylish.” Kayan Choi said, “She has an athletic body, her muscles are very tight when touching it.”

As for Nicole Yiu and Iva Liu, who have the biggest busts out of all the contestants said they were nervous and claim they’ve never worn such “sexy” bikini before.