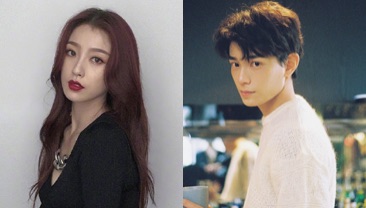 THE9’s Esther Yu (虞书欣) has been one of the busiest members since the group debuted on May 30. Beside the group’s idol show, “Let’s Party” (非日常派对), Esther Yu has already been a guest on “Go! Fighting: Treasure Tour” (极限挑战宝藏行) and is one of the mentors on variety show, “Dimension Nova” (跨次元新星), with Angelababy and former NINE PERCENT member, Xiao Gui. Aside from variety shows, Esther Yu will also be filming her first drama since her debut with THE9.

On September 26, Esther Yu and Ding Yuxi (丁禹兮) were announced as the leads in the iQiyi-backed modern series, “Moonlight” (月光变奏曲), which is based on the novel of the same name. Ding Yuxi is coming off the popularity of “The Romance of Tiger and Rose” (传闻中的陈芊芊). He is also currently a panelist on Tencent’s reality dating show, “Heart Signal 3” (心动的信号3).

A godly writer by the name of “Zhou Chuan” (played by Ding Yuxi) has always claimed the role of an editor is dead in the era of the internet. He ends up meeting the rookie editor, “Chu Li”, but they don’t get along. However, “Zhou Chuan” unexpectedly discovers “Chu Li” is actually his online friend, “Monkey Lord”, who he has confided in for many years. While “Zhou Chuan” is labeled by his fans as “Warm as Jade: Prince Chuan”, “Chu Li’s” views him as a two faced person who acts differently in front of people and behind their backs. They continue the love-hate relationship while growing up and publishing books together and eventually develop a relationship based on growth and love.