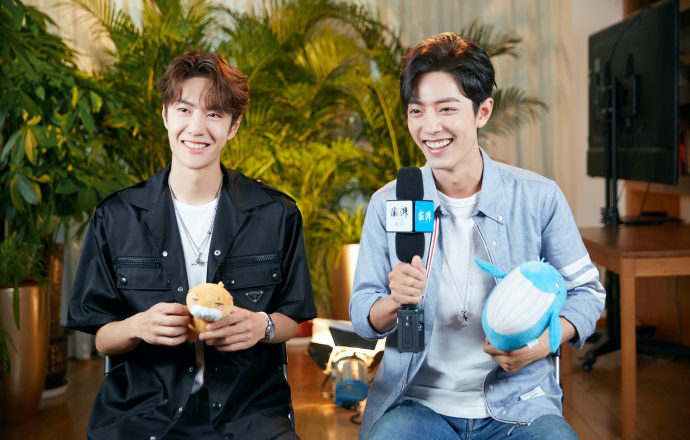 While it might be Wang Yibo’s (王一博) 22nd birthday today (August 5), many fan girls feel like it’s their birthday. First, it was a new BTS video of Wang Yibo and Xiao Zhan’s (肖战) Harper’s Bazaar photo shoot and now it’s Xiao Zhan dedicating a birthday post to Wang Yibo at 12:42 am China time.

Xiao Zhan uploaded two pictures, one of them in costume and one of Wang Yibo on a motorcycle, along with this caption: “Not going to say much! Old Wang, Happy Birthday! Charge forward!”

Wang Yibo left a comment on his post saying, “My god, thank you Zhan Ge (Brother Zhan)!!! (The motorcycle picture should be updated.)” Xiao Zhan replied, “Okay!” with a meme of Wang Yibo saying “Wow.”

What’s hilarious is that a fake account imitating Xiao Zhan left a comment on Wang Yibo’s automatic birthday post from Weibo. The fake account holder said: “Xiongdi (Older Brother, Younger Brother), happy birthday!” Wang Yibo unknowingly responded back saying, “Thank you, Zhan Ge.” Xiao Zhan replied to Wang Yibo and said, “Ge! This is fake! I give up!”, along with a meme of Jerry. Wang Yibo deleted his reply to the fake account, but not before it was screen shotted by fans.